Temple hit the road to Chestnut Hill, Massachusetts and dropped its third game of the season against the Boston College Eagles by the score of 45-35. The Owls entered this contest riding a 2-game win streak with all the momentum behind them. Boston College had a hot start to the season going 3-0 before finally being cooled off by a winless Purdue squad last week. In that game, the Eagles were held to only 34 yards rushing and Quarterback Anthony Brown forced 4 interceptions to the Boilermakers defense. Boston College wound up losing its first game of the season to Purdue by a score of 30-13.

Today’s matchup was pretty evenly matched however this game is marked by the amount of penalties each team racked up. Temple was penalized 11 times totaling 95 yards while Boston College’s ten penalties totaled 79 yards. Three players wound up getting ejected from this game due to targeting. Boston College DB Lukas Denis was ejected in the second quarter. Temple’s TE Chris Myarick and Safety Jyquis Thomas were also ejected. The Quarterback position is still an area of concern for Temple early on this season. Temple Senior Quarterback Frank Nutile started the season for the Owls however he suffered a nondisclosed injury after the Week 2 game against Buffalo. Redshirt Sophomore Anthony Russo then stepped in to start the Maryland game, and after the Owls dropped the first two games of the season, Russo helped lead the team to back-to-back wins. Coach Collins did not name his starter coming into the Boston College game, but Russo ultimately received the nod. Russo did not have a very good game against BC this week as he completed less than 50% of his passes (20/45) and forced two interceptions to the Eagles defense. Boston College Quarterback Anthony Brown greatly improved this game as he threw for two touchdowns and no interceptions. 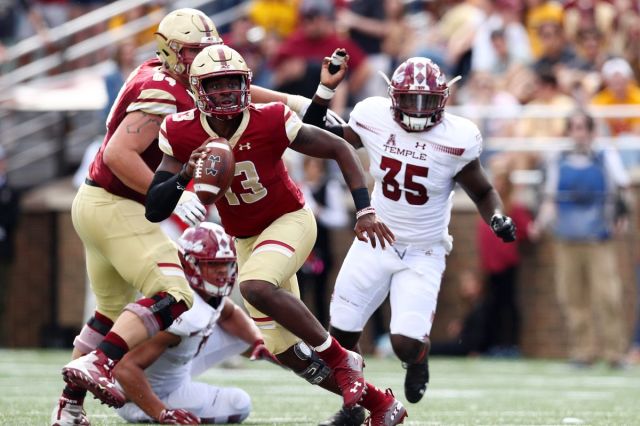 The Running Backs from both teams were the main highlight of this game. Despite the loss, Temple Running Back Ryquell Armstead had a great day today, as the senior saw the end zone four times and racked up 171 yards on 24 carries.  Armstead’s longest scoring run was for 75 yards during the first quarter which helped the Owls take early lead of the game. However Boston College would ultimately take control of this game behind the legs of its running backs AJ Dillon and Ben Glines. The dynamic duo rushed for a combined 281 yards and three touchdowns. Dillon would leave the game in the third quarter with an ankle injury and never returned. Temple Junior Receiver Isaiah Wright led both teams in receiving yards with 114. For the fifth straight week the Owls have scored a non-offensive touchdown. Today, Temple Linebacker Isaiah Graham-Mobley returned a fumble return 19-yards for the touchdown. The strength of this team is on defense even despite the fact that the Owls have allowed at least 400 yards of total offense in four out of its five games this season. Until this team’s issues at Quarterback are resolved, the team will rely heavily on the Owls defense to force turnovers. And fortunately the Temple defense already has a nose for the end zone as its scored touchdowns in each of the last three games.

The focus regarding the Owls this upcoming week will revolve around who will be named starter at Quarterback. Next week the Owls will look to rebound next Saturday against American Athletic Conference opponent ECU at home. The Owls are currently 1-0 in conference play this season.