The College Football Season might be over and done with, but I had a few notes regarding how these teams preformed in 2010. I hope you enjoy the reading material!
Iowa
The Hawkeyes underachieved this season, which is partly to blame on poor coaching and the team’s inability to finish games. If you take a look at Iowa’s conference losses you’ll notice that the Hawkeyes had the lead in the fourth quarter. In three of those losses, Iowa surrendered the lead within the last two-minutes of the game. And if anything else can be noted, it’s that Kirk Ferentz’s Iowa program is turning into the new Miami U of the midwest with all the Hawkeye players getting in trouble with the law…

Ohio State
Next season the Buckeyes will start the 2011 season off with 5 of its players sidelined for the first five games. QB Terrelle Pryor is amongst the players in trouble with the NCAA and his absence from the team will hurt OSU the most. The Buckeyes will have to travel to Miami in Week 2 and then face MSU in Week 4 before the players can return in time for the Nebraska showdown. If OSU expects to return to another BCS game next year it certainly won’t be easy.

Wisconsin
The Badgers have been good for the past few seasons but lacked consistency. The skeptics have been critical of Brett Bielema ever since he took over for Coach Alvarez, but this season Bielema finally proved he IS the right man for the job. The Badgers’ offense was explosive in 2010, averaging around 43 ppg. In fact, the Badgers scored 70 points or more three times this season. IMPRESSIVE. However, I expect the Badgers to take a dip in 2011 as its offense loses a lot of key players including QB Scot Tolzien and RB John Clay.

Penn State
When you look at PSU’s schedule from 2010, its wins and losses make sense all except for the Illinois loss at home. The Illini offense posted over 400 yards of total offense. Another staggering statistic is that Illinois rushed for 282 yards! This team will see the departure of RB Evan Royster but I believe the Nittany Lions will be just fine in 2011.

Michigan State
What an unbelievable season MSU had this year. The Spartans went 11-2 and lost only one conference game this to Iowa. I don’t believe the Spartans will have the same success next season but QB Kirk Cousins returns, so anything is possible. 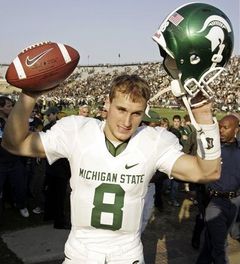