#4: Notre Dame vs. Miami: These two teams might have similar records but don’t be deceived, they’re headed in two separate directions. Notre Dame finished on a high note winning the final three regular season games. The Irish dominated a #14 ranked Utah team, whooped up on Army, and then stole a road win against an always-physical USC squad. The Hurricanes on the other hand, not only lost its final two games of the season but also saw their Head Coach, Randy Shannon get fired…OUCH. Notre Dame wants a win to roll into the offseason on a strong note. Miami needs this win for a morale booster. I’m an ACC guy, but my head tells me Notre Dame will pull off the victory. 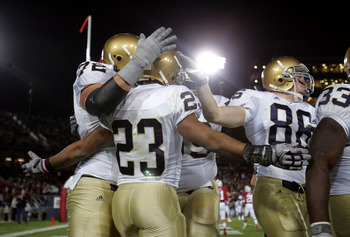 #3: South Carolina vs. Florida State: Both of these teams improved from a season ago and finished atop their respective divisions. The future looks bright for Jimbo Fisher down in Tallahassee, and Steve Spurrier was finally able to take the Gamecocks to the SEC Championships (for the first time in school history!). Unfortunately I’m choosing against the ACC again; South Carolina wins this one.

#2: Florida vs. Penn State: All eyes will be on this matchup as two of the most storied coaches in college football history square off against each other. I don’t care if anybody disagrees with me on this, but I think Joe Paterno is good for college football. I don’t care how old a coach is; if he’s still got it, he’s still got it. I hope he continues coaching until he’s 100 years old. On the other sideline, Coach Urban Meyer has already accomplished so much in such a short amount of time. I think he’s earned the right to take a break; the guy’s won two National Championships–a lot of schools don’t even have 1! Florida’s 7-5 record was the worst record under Coach Meyer’s tenure. And while this isn’t the way he wanted to go out, I believe the Gators will dominate Penn State in all facets of the game.

#1: Wisconsin vs. TCU: This is the matchup I’m most looking forward to. You have such a high-powered offense in Wisconsin and a physical, hard-nosed defense with TCU. On paper, TCU puts up more rushing yards per game than it’s Big 10 counterpart, but Wisconsin’s James White and John Clay might be the best 1-2 punch in all of college football. However, TCU might boast the best defense in all of college football. The Horned Frogs only surrender around 11 points per game. I think this game will be a slugfest with TCU delivering the knockout punch!