Another glorious Saturday returns with several huge games on the slate, including Arkansas vs. Auburn, Texas vs. Nebraska, and Ohio State vs. Wisconsin…just to name a few.
The Arkansas vs. Auburn game has the potential to be the best game of the weekend. Auburn has started the season off undefeated just like last season. However last year Ryan Mallett and his Razorbacks snapped the Tigers’ streak in Week 6.  Will Mallett snap that streak again this weekend? I believe Arkansas should be undefeated and if it weren’t for so many mistakes against Alabama, it would be. In that close 24-20 loss, Mallett threw 3 INTs which is exactly the same amount of times I’ve mentioned him in this entry. It definitely won’t be an easy victory on the road at Auburn but if Mr. Mallett can limit those mistakes they’ll make it 3 straight victories over Auburn. 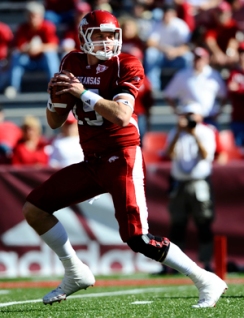 I’ve been looking forward to this Texas vs. Nebraska game since last season when Texas won with a second left on the clock. Texas has not been looking like the dominant team we’ve all been used to recently: Two straight losses (against UCLA and Oklahoma).  But over in Lincoln, Nebraska has been playing like a national championship contender. For Nebraska to stay in the conversation it must blow Texas out at home this weekend. Quarterback Taylor Martinez is a dual-threat and I look for him to have a big game against the Longhorns. 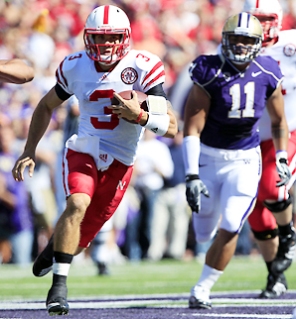 Ohio State has a tough road test up in Madison and no doubt Camp Randall will be rockin’.  The Buckeyes escaped a scare over in Champaign a couple weeks ago and even though the Illini didn’t win, they exposed a lot of OSU’s weaknesses. If Wisconsin stands to have any chance in this game it must get workhorse John Clay going from the first snap. In the Week 5 loss to Michigan State, Clay rushed for under 100 yards. The Badgers are most effective when he’s got 100+. Wisconsin is going to have to play a complete game to win this one, but if the Badgers pull off the upset this will be the biggest win this program has experienced under Brett Bielema’s tenure as head coach.